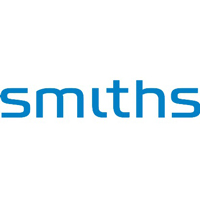 Smiths Group “significant year in the evolution of the company”

o  Underlying revenue +3%, building on the Group’s return to growth last year.  Strong performances in John Crane, Flex-Tek and Interconnect, moderated by the timing of deliveries in Smiths Detection

o  The net impact of acquisitions and disposals and favourable foreign exchange translation each added a further 2% to revenue growth.  As a result, reported revenue increased 7%

o  Further progress on portfolio optimisation – now over 90% well positioned. Two acquisitions completed during the year including Flex-Tek’s acquisition of United Flexible for $345m in February 2019

o  Returned to growth in H2, with underlying revenue +2%; flat for the year with an improved margin in H2

o  The differences between headline and statutory operating profit are non-headline items as defined in note 3 to the accounts, of which the largest constituents are the amortisation of acquired intangibles, and the Guaranteed Minimum Pensions (GMP) equalisation

o  Basic headline EPS up 7% to 96.8p but down 19% on a statutory basis due to the reasons stated above

o  Further progress expected in FY2020, with year on year growth weighted towards the first half; resulting in a more even balance in overall performance between the first and second halves

“FY2019 was a significant year in the evolution of Smiths. We continue to build sustainable growth, paving the way to outperform our markets.  Importantly, this growth was coupled with enhanced margins, we have now delivered a 300 basis points margin improvement since 2016.  In addition, we continued to optimise our portfolio, with two acquisitions completed in the year.

In this context of progress and confidence in the future, we announced plans to separate Smiths Medical to create two stronger, industry-leading companies. I am delighted to have welcomed JehanZeb Noor as CEO of Smiths Medical. The separation process is progressing well; we are on track for demerger by the end of the first half of CY2020.

In FY2020 we expect to make further progress, with year on year growth weighted towards the first half and resulting in a more even balance in overall performance between the first and second halves.  At current rates, foreign exchange will provide a tailwind to revenue and profit.

We remain on course to grow faster than our markets over the medium-term.  Our strategy is to focus the portfolio for growth and deliver world-class competitiveness, within a strong financial framework.  The Board remains confident that this will drive long-term sustainable growth and attractive returns.”

See accounting policies for an explanation of the presentation of results and note 3 to the financial statements for an analysis of non-headline items.

The following definitions are applied throughout the document:

1Headline: In addition to statutory reporting, Smiths Group reports on a headline basis except for balance sheet and cash-flow.  Definitions of headline metrics, and information about the adjustments to statutory measures, are provided in note 3 to the financial statements

4 Continuing operations exclude Smiths Medical which is accounted for as ‘discontinued operations – businesses held for distribution to owners’, given the intended separation of Smiths Medical by the end of the first half of CY2020