Q1: You’ve just announced results for year-end 30th June 2018 with a record Q4, can you talk us the key financial highlights there?

A1: We’ve just ended our full year ’18 which finished June 30th, we did £19.4 million in Net Gaming Revenue (NGR) against £13.1 million in the previous year. I think the reason we’re pretty delighted is the continued growth into our fourth quarter, full year ’18, which was £5.7 million against Q3, which was a record quarter for us, at £5.1 million so close to 11% growth in the quarter which was quite exceptional.

Q2: What has driven all of this growth?

A2: If you look at the key performance indicators that we have in the business and the highlights that are in the note we’ve put out on our Q4 trading update, our KPI’s are very strong. So, First Time Depositors (FTDs), that’s new customers that deposit on our platform was £43,289 against in Q3 £36,359 and if you look at the year-end, we had £156,703 new players in this last year and Cash Wagering has increased as well.

So, the important factor is that this isn’t an anomaly, we’ve actually got growth across all of our measured KPI’s so that’s what’s driven the growth.

Q3: In terms of operations, what were the key points from the update that investors should be looking at?

A3: I think the big thing for us is the fact we’re moving, as I’ve indicated previously in some interviews, we’re moving away from having too much of a UK central focus.
We’re particularly excited about the announcements in terms of what we’re doing in some of the newer markets we’re developing into, outside of say Europe which is really where we scaled the business.

So, we’re really quite excited about the newer contracts that we’re in negotiations with and should be closing fairly imminently which will allow us to develop the business into more markets on a global basis. So, that’s where we are particularly excited about the growth in this next financial year.

Q4: I think you’ve just hinted at what we can expect in terms of news flow but is there anything from Nektan that we should be looking for?

A4: Yes, I think over the next 6-8 weeks, we’re confident that we’re going to be closing some material deals with well-known brands in our market, our vertical market, as our technology becomes recognised as being probably creating a new standard in terms of mobile casino which we’re becoming recognised for.

As I’ve hinted before, I think a lot of people are actually working with us because of the responsiveness of the company in terms of getting live and having very exciting content. In this quarter, we expect to be announcing content deals with leading content providers and we’ll be distributing that content for the first time for some of the providers in some of the new markets.

So, they’re going to use our core platform to deliver their content into market opportunities and that obviously is quite exciting for us into the next year. 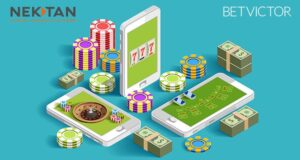