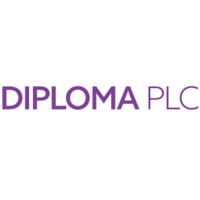 Diploma PLC (LON:DPLM) confirms that Johnny Thomson has today joined the Company and the Board as Chief Executive Officer.

At the same time and as previously announced, John Nicholas, who has been interim Executive Chairman since 29 August 2018, has now relinquished his executive responsibilities and has resumed his non-Executive Chairman role.

You can read the full DPLM archive by clicking the EPIC code.

Diploma plc Too early to quantify COVID impact on trading