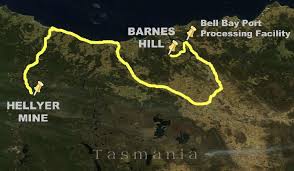 NQ Minerals Plc (AQUIS:NQMI), the base and precious metals producer at the Hellyer Gold Mine in Tasmania Australia, has today announced progress on the flowsheet being developed for the Barnes Hill nickel and cobalt project. NQ Minerals is funding this development work through its investment in Tasmania Energy Metals Pty Ltd. Following further metallurgical testwork and initial engineering works, an updated flowsheet has been developed for the PFS. This updated flowsheet enables utilisation of lower grade feed for neutralisation of the process solutions after Ni and Co extraction. Accordingly, an updated Mineral Resource estimate for the Barnes Hill, Scotts Hill and Mount Vulcan deposits has been released covering all types of potential feed material.

·    Metallurgical testwork has supported an updated flowsheet that will serve as the base case in the current Pre-Feasibility Study (“PFS”). A metallurgical simulation model of the mass and energy balances of the central processing circuits has been completed to allow appropriate sizing of plant equipment and to support subsequent design work.

·   The updated flowsheet includes three stage leaching that utilises the full laterite profile. Low grade material is also upgraded through screening to be used in the third neutralisation stage.

·    A residue filtration section has also been added that will allow for dry stacking of laterite waste back into the original pit. This removes the need for a tailings dam at the nickel mine.

“The completion of this testwork and commencement of engineering sees the Barnes Hill project starting to take on physical shape. The lower cut-off Mineral Resource estimates for Barnes Hill, Scotts Hill and Mt Vulcan provides support for our long-term plans for the Beaconsfield region, and this larger tonnage of 25 million tonnes, versus 14 million tonnes previously reported, could supply a plant of the planned scale for well over 20 years. Our close proximity to the deep-water port at Bell Bay in Tasmania also suggests opportunities to import and blend in high-grade ore to boost feed grades and extend the life of the Barnes Hill mine even further.

“We are actively examining the ability to achieve further enhance economics by planning this downstream development to take advantage of our plans for the adjacent Beaconsfield Gold site. We expect to make an announcement on the final plant location in the near term. We are already speaking to off-takers and battery industry players and believe there is strong support for this development.”

Testwork to Establish the PFS Flowsheet

Metallurgical testwork has supported an updated flowsheet that will serve as the basis for the current PFS. A metallurgical simulation model, providing a detailed understanding of the mass and energy balances across the central processing operations has now been completed. It was designed using the well-respected METSIM software. The outputs of this model will allow appropriate sizing of plant equipment and support subsequent design work. The METSIM model, alongside other cost inputs, will also allow estimation of a new ore reserve (replacing the ore reserve issued by Snowden in 2010) for the Barnes Hill North and South deposits. The ore reserve will include pit design and the delivery of a mining schedule covering the initial years of planned operations.

The updated flowsheet includes three stage leaching that allows utilization of the full laterite profile including limonite, transitional, saprolite and saprock material. Blends of higher grade material will feed the initial two leaching stages. In addition, a screened fraction of low grade material is used in the third neutralization stage.

This updated flowsheet is based on laboratory testwork completed over recent months. For the testwork, TEM selected a purposive sample of intersections from the 2019 air-core drilling. The samples were checked for representativeness against the Barnes Hill resource. Following this, 90 drilled intersections were sent to the Beijing General Research Institute of Mining & Metallurgy (“BGRIMM”), a well-established Chinese laboratory with expertise in multi-stage leaching. These samples totally 518.5kg. The testwork applied sequential sulphuric acid leaching with varied blends of feed. In the first stage a blend of limonite/transitional/saprolite was processed with a high dosage of acid at a leaching temperature of 95degC. This was followed by a further stage of leaching of saprolite/saprock feed in an autoclave, where no additional acid was added but the temperature was raised to 160degC. A screened large-sized fraction from the saprock domain was then used for a neutralisation stage. This was ground and used in a tertiary leach to commence neutralisation, with no additional acid added. Results supported the ability to achieve overall Nickel and Cobalt extraction of over 90% across all three leaching stages with an acid consumption of 509kg/t feed. In accordance with the current plant design, this acid will be entirely supplied by utilising waste streams from the roasting of Hellyer’s gold and silver-bearing pyrite concentrate, which will separately produce gold/silver doré bars and copper/zinc intermediates. Testwork also included beneficiation testwork, including dry and wet screening, magnetic separation and gravity upgrading. As expected, wet screening produced strong results, particularly for saprock material. This was then built into the testwork, with a screened fraction of saprock providing a high-Mg neutralisation feed stock.

In addition to examining leaching, some initial filtration testwork has been performed. On the basis of those first-pass results, which are consistent with experiences at other comparable nickel laterite projects, an updated filtration section has also been added to the plant design that will allow for dry stacking of laterite waste back into the original pit. This removes the need for a tailings dam at the nickel mine.

The improved flowsheet further enhances the project’s green credentials, with ore-based neutralisation reducing the CO2 footprint and dry stacking enabling the refilled mining pit to be rehabilitated to close to its original form. The project already benefits from its Tasmania location where it will be able to be supplied by 100% renewable hydroelectric and wind power. NQ Minerals believes that these advantages make the Barnes Hill project environmentally attractive relative to peer projects. This is expected to be increasingly important in the Electric Vehicle supply chain where cradle-to-grave emissions assessment is becoming more prominent. NQ Minerals is in initial discussions with battery industry players regarding the future development of the project.

The Barnes Hill Project is composed of four resources, all located within 2km of each other. Mining lease 1872P/M hosts the Barnes Hill North and South deposits, while Scotts Hill and Mt Vulcan (“Scotts/Vulcan”) occur primarily within exploration license EL2/2017 which is adjacent to the liming lease. All licenses are 100% owned by TEM.

On the basis of work done so far, an updated Mineral Resource Estimate has been issued by Snowden Mining Industry Consultants Pty Ltd for the Barnes Hill Nickel Project to include the lower grade Ni material. The expanded resource now totals  25Mt @ 0.6% Ni and 0.05% Co at a 0.25% Ni cut-off (indicated and inferred) as shown in Table 1 below. This complements the 0.5% Ni cut-off Mineral Resource estimate released on 25 November 2019. That previously announced resource (with a higher Ni cut-off) will still provide the main supply into the first two stages of leaching. Snowden found the revised lower cut-off grade to be reasonable assuming a standard open-pit mining approach with low-to-moderate selectivity and that it is commensurate with the cut-off grade used at similar deposits where beneficiation through screening is applicable.

Notes: 1) Please refer to the end of this section for the Competent Persons statements; 2) the Mineral Resource is reported in accordance with the JORC Code (2012) with required tables included in the appendix; 3) Some rounding related discrepancies may occur in the totals.

The Mineral Resources were estimated using block models, constructed using a parent cell size of 25 mE by 25 mN by 1 mRL for Barnes Hill and 50 mE by 50 mN by 1 mRL for Scotts-Vulcan, constrained within the wireframed domains of the interpreted laterite layers.  Grades were estimated using ordinary block kriging for both the Barnes Hill deposit and Scotts-Vulcan.  Search ellipses and estimation parameters were based on the results of the variography, along with consideration of the drill spacing and geometry of the mineralisation. Global average density values were applied to the blocks according to the domain based on density measurements of diamond drill core.

The Barnes Hill and Scotts-Vulcan Mineral Resource estimates have been classified and reported in accordance with the JORC Code (2012). Mineral Resources for the Barnes Hill deposit have been classified as a combination of Indicated and Inferred Resources, while the Scotts-Vulcan resource has been classified as an Inferred Resource.  The classification was developed by Snowden based on an assessment of the nature and quality of the drilling, sampling and assaying methods; drill spacing; confidence in the geological interpretation; and results of the model validation.  The Mineral Resource is limited to the Limonite, Transitional, Saprolite and Saprock domains, with lower-Ni, higher-Fe domains above the limonite excluded.  At Barnes Hill, where drilling is approximately 50 mN by 50 mE or better and the thickness is greater than 2 m, the resource has been classified as an Indicated Resource.  Areas that are not supported by a 50 mN by 50 mE drill spacing or are less than 1 m in thickness have been assigned an Inferred classification.  At Scotts-Vulcan, blocks within approximately 125 m of a drillhole have been classified as an Inferred Resource, with extrapolation beyond that excluded.

You can read the full NQMI archive by clicking the EPIC code.