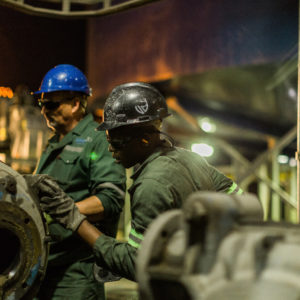 Jubilee Metals Group plc (LON:JLP), the AIM and Altx traded metals processing company, has announced that it has entered into a third party Run-Of-Mine chrome ore offtake agreement that fully commits its Windsor chrome beneficiation plant for the next three years, with an option for this to be extended further.

Under the terms of the Offtake Agreement, Jubilee commits to the production of 40 000 tonnes per month of chrome concentrate or, subject to the chrome content in the ROM, saleable chrome concentrate, while also retaining the rights to all discard material including the contained PGMs.

In addition, Jubilee has also successfully entered into a joint venture agreement with a privately held South African company to secure the rights to a further 35 000 tonnes per month chrome processing capacity.  Under the JV Agreement Jubilee will assume operational control of the Windsor 8 facility while also committing to upgrade it by incorporating Jubilee’s processing solutions.

·    The Offtake Agreement secures supply of quality feed to Windsor and supports 100%  operating capacity for the next three years, while continuing to further supplement the existing PGM feed material to Jubilee’s PGM plants

·    Jubilee also executes a JV Agreement to secure Windsor 8, being the rights to an additional 35 000 tonnes per month chrome processing capacity at the Facility

Leon Coetzer, CEO of Jubilee Metals, commented: “Jubilee continues to aggressively drive its expansion across both its South African and Zambian operations. Our significant progress in Zambia, as announced last week, is followed by the successful implementation of these two key agreements supporting the expansion of our South African chrome and PGM operations.  These agreements have been secured on the back of Jubilee’s track record of continuously driving to set new industry standards.

“The Offtake Agreement, which supports Windsor’s capacity to produce 40 000 tonnes per month of chrome concentrate, secures not only a constant feed source for Windsor under a protected operational margin, but also  significantly increases Jubilee’s surface PGM resources from the discard of the chrome operations.  The successful completion of the Offtake Agreement is credit to the Jubilee team’s ability to consistently achieve exceptional chrome recovery efficiencies well above the norm in the industry.

“With Windsor fully committed to working at full capacity, Jubilee has also successfully secured Windsor 8 under a JV Agreement, being the rights to a further 35 000 tonnes per month of chrome processing capacity.  The new Facility and JV partner were carefully selected to establish a presence in a strategic location which will provide Jubilee with further opportunities to increase our chrome ore supply.”

Under the terms of the Offtake Agreement, Windsor will receive a minimum guaranteed ROM supply targeting the production of 40 000 tonnes per month of chrome concentrate, linking to the chrome content of the ROM.  The Offtake Agreement secures both a committed feed of material to Windsor as well as the continued production of upgraded PGM discard material for further processing at Jubilee’s PGM recovery plants.

On the back of this Offtake Agreement Jubilee has also successfully entered into the Joint Venture Agreement with its JV Partner to secure the rights to a further 35 000 tonnes per month chrome processing capacity (being Windsor 8). Under the JV Agreement Jubilee will assume operational control of the Facility while also committing to upgrade the Facility by incorporating Jubilee’s processing solutions. The Facility is strategically located to expand Jubilee’s reach providing it with more opportunities to secure further third party chrome material supplies.

Jubilee has locked in the forward sale price of the produced chrome concentrate at its Windsor operation to hedge the Company against a volatile chrome price driven mainly by uncertainty in the current supply and demand fundamentals of the metal. The fixed forward sale price secures a firm earnings margin for Windsor while allowing Windsor 8 to take advantage of any short-term price fluctuations. The earnings margin of Windsor is strongly influenced by the efficiencies achieved by Windsor and excludes the added benefit of the recovered PGM ounces from the discard.  Windsor is budgeted to operate at a chrome alone margin ranging between a minimum of 14% to a maximum of 25% per tonne of chrome concentrate with the additional PGM margin secured for Jubilee’s PGM operations.

Under the terms of the JV Agreement, Jubilee and its JV Partner formed an unincorporated joint venture with Jubilee holding the rights to 70% of all earnings generated by the Joint Venture.  Jubilee may at any time during the next five years elect to incorporate the Joint Venture under a new subsidiary.  All capital plus interest invested into the Joint Venture by Jubilee shall first be repaid prior to any distribution of earnings from the Joint Venture.  Jubilee has committed to invest an estimated ZAR 10 million (GBP 440 000) towards the upgrade of Windsor 8. Jubilee is further appointed as the manager of the Joint Venture and the operator of Windsor 8, currently owned by the JV Partner.   Windsor 8 benefits from the shared services offered by Windsor to dilute its overhead and position itself as one of the lowest cost, third party chrome beneficiation facilities. The PGM containing discard from Windsor 8 will be acquired by Jubilee under an existing agreement with the JV Partner.