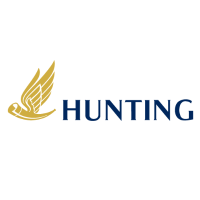 As anticipated, challenging markets continue to be a feature of our industry, negatively impacting trading conditions and results in September. In particular, a slow down within US onshore completions has continued which has been partially countered by ongoing improvements within our offshore and international operations, resulting in a net overall decline for the Group profit in the quarter compared to Q1 and Q2 2019. As a result, the Board anticipates a full year EBITDA result at the lower end of market expectations, given current trading momentum and the overall product mix of results forecast for the balance of the year.

Revenue and operating profits within Hunting Titan for Q3 report results below those of Q1 and Q2 2019. Sales of the H-1 and H-2 Perforating Gun Systems continue to reflect a greater share of Titan’s overall gun sales. New technology launched in the year, including the E-SUB Perforating System and T-Set One setting tool are seeing good customer adoption. Management continue to anticipate a slowing in drilling across North America in Q4, which will further impact the results for the second half of the year.

In the US segment revenues were generally stable during the quarter resulting from higher offshore and international market demand. Of note has been a strong performance by the Advanced Manufacturing Group, and in particular the Hunting Electronics business, as demand for downhole measurement tools has remained steady. As announced on 16 August 2019, the Group completed the acquisition of the business and assets of RTI Energy Systems Inc. Integration of the business into the Group’s Subsea operations is progressing, with new sales opportunities already being pursued. During the quarter $0.7m of acquisition costs relating to RTIES were expensed within the income statement.

Within the Canada segment losses have narrowed after new orders were secured with customers on a lower cost base, following the restructuring completed at the end of Q2 2019. In EMEA, despite higher activity levels in the North Sea a small operating loss is reported in the quarter. Asia Pacific has also reported a small loss during Q3, as international trade tensions dampen market sentiment.

Overall Hunting plc continues to deliver operating profits, generate cash and exercise ongoing cost discipline. Working capital is controlled and continues to report a modest reduction in inventory levels since year-end. Capital spend remains modest and tax losses from prior years continue to shelter the Group from any significant outflows of cash tax. Net cash, excluding lease liabilities, at the end of Q3 was $58.5m. The interim dividend of 5.0 cents per share, absorbing $8.3m, was paid on 23 October 2019.

You can read the full HTG archive by clicking the EPIC code.