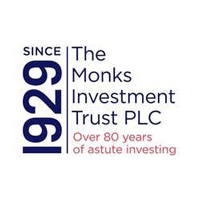 Over the six month period, the Company produced a negative net asset value (NAV)* return of 0.9% compared to an increase of 4.5% for the FTSE World Index (in sterling), both in total return terms. The share price total return for the same period declined 1.9% and the shares ended the period trading at a premium of 2.4% to the Company’s NAV*.

¾ Anthem and Amazon were the notable positive contributors to absolute returns in the period. Naspers and Prudential were the largest detractors.

¾ Earnings per share were 2.54p compared to 1.77p in the corresponding period. No interim dividend is to be paid.

¾ The Managers remain optimistic about the potential future returns from long-term equity investing and the portfolio remains well diversified by geography and industry, with exposure to a broad range of strong growth companies.

*With borrowings deducted at fair value.

After a period of generally steadily rising markets, the past six months have seen a return of volatility and a shift in market sentiment. This is far from unusual or unhealthy as markets rarely move in straight lines and are subject to unpredictable mood swings. The managers are bottom-up investors who do not attempt to time or forecast market moves but who instead focus on identifying and holding a portfolio of the best growth companies from around the world. They believe that retaining a long-term view that focuses on corporate fundamentals is the best way to produce superior returns.

During the period, the Company produced a negative net asset value (NAV)* return of 0.9% compared to an increase of 4.5% for the comparative index (FTSE World in sterling), both in total return terms. Over the period, the share price total return declined by 1.9% with the premium to NAV* falling from 3.4% to 2.4%. While this was evidently not a profitable period for the Company, the board and managers believe that performance should be judged over the longer term. Since the current team took over management of Monks Investment Trust on 27 March 2015, the comparative index total return has been 46.7%, the NAV* total return 56.0% and the share price total return 82.4%.

Not surprisingly given the market volatility and performance described above, several holdings in the portfolio saw material share price declines. A number of Asian consumer holdings got caught up in the negative sentiment towards Emerging Markets, which in turn was partly driven by trade war rhetoric. Whilst, as described below, the managers have been diversifying the portfolio somewhat in recent months, they have retained their enthusiasm for Asian companies which they believe offer exceptional long-term growth prospects, but in the short term have held back portfolio performance.

The turnover of holdings in the portfolio was low and is consistent with a near six year holding period. During the period, ten new holdings were purchased and eight sold. In general, there are three broad themes reflecting a desire for greater diversification in the portfolio.

First, over the long term the portfolio has benefited from many profitable investments in ‘online platforms’. Within this area the managers have been recycling money away from the biggest technology platforms which have been amongst the outstanding past performers into smaller and less established online companies which are believed to have the potential for rapid growth. Since mid-2017, the position in Amazon (online retail and cloud computing) has been trimmed four times (twice during the reporting period) with the total number of shares held reduced by around one-third.

Successful platforms often bring together buyers and sellers at scale, offering a better selection of products or services and lowering prices. These features are clear in online food delivery. GrubHub, the dominant US player, has been held since 2015. It is delivering on its potential and the position has been trimmed to help fund a new holding in Just Eat, which leads in markets such as the UK, Canada, Australia and Brazil. A position was also initiated in Meituan Dianping, which offers food delivery and other local services in China. Meituan has 310 million customers in 2,800 cities.

Banking is another sector which is likely to see a lot of disruption from platforms over the coming decade. In mature economies, these ‘Fintech’ disruptors are often using the established credit card infrastructure, hence the continued ownership of Visa and Mastercard. China is different: the managers invested in the unlisted Ant International, which was spun out from Alibaba in 2014 and offers the largest mobile payment app in China. In 2017 Ant processed transactions worth over U$9 trillion, up over 50% on a year earlier. By comparison, Visa and Mastercard’s combined transaction values in 2017 were U$12.5 trillion and grew by 20%.

Secondly, exposure was reduced where share prices have been unusually strong, notably in semiconductors which can be a viciously cyclical industry. The holdings in Samsung Electronics and NVIDIA were sold and the positions in Advanced Micro Devices and TSMC reduced. Elsewhere, Abiomed, the manufacturer of the world’s smallest heart pump, is a good example of shares moving much faster than fundamentals. Abiomed was purchased in early 2017 on the premise that it was capable of growing its earnings 30%-35% per annum for a decade. However, the shares rose three and a half times in just over 18 months and the valuation moved from high to stratospheric, so the position was sold.

Another area where it was felt that valuations had become stretched was in US domestic cyclicals. The exposure here has been reduced through the complete sale of Lincoln Electric (welding equipment), the reduction of Royal Caribbean Cruises for the third time in just over a year, and the reduction of SiteOne Landscape Supply (a distributor to professional landscaping contractors) whose shares had nearly doubled since the initial purchase in 2017.

Thirdly, the managers have looked to diversify the portfolio into stocks which are uncorrelated with the rest of the portfolio. Mining and oil production have both suffered from lower commodity prices in recent years and a consequent cutback in capital expenditure. Companies have stopped spending on new projects and this should eventually lead to better supply/demand characteristics, rising prices, more respectable returns and ultimately a new investment cycle. Recent purchases include BHP Billiton (a diversified miner) and Albemarle (lithium mining). Additions have been made to Epiroc (a spin out from Atlas Copco, involved in mining equipment) and Kirby, which is a barge operator moving petro-chemicals around US waterways. Positions have also been initiated in Chipotle Mexican Grill, a fast-casual dining chain, and Service Corp International, the dominant US funeral operator.

The level of actual gearing at the period end stood at 6.6%, compared to 4.6% six months earlier. We increased borrowings moderately during the period by drawing on our existing facilities. It is expected that gearing will be maintained in the range of minus 15% to plus 15%, with the intention of plus 10% as a long-term neutral position.

No interim dividend is being paid. A single final dividend will typically be paid after the full year results, reflecting the Company’s focus on capital growth.

The managers remain optimistic about the long-term opportunities afforded by the companies held in the portfolio. The operating performance of the vast majority of these investments remains strong.

The managers retain great enthusiasm for Asian growth and the portfolio contains many exciting technology and consumer companies across the region. During the period two new Asian insurance holdings were purchased. Ping An Insurance, which brings exposure to mainland China, and ICICI Prudential in India. This, along with Prudential PLC and AIA, brings the number of Asian insurance focused holdings to four. This enthusiasm is based on an Asian middle-class population which is around six times the size of that of the G7, but where spending on social welfare is only one-sixth of western levels.

Technology, disruption and innovation also remain at the heart of the portfolio. Many of the holdings are seeking to disrupt traditional business models and benefit from the huge growth in cloud computing and storage. Diversification remains a key portfolio characteristic, which we believe will support the performance of the portfolio through a range of economic and market environments.

The principal risks and uncertainties facing the Company are set out in note 12.

We believe the following features of Monks provide a sustainable basis for adding value for shareholders.

¾ We invest in attractive companies using a ‘bottom-up’ investment process. Macroeconomic forecasts are of relatively little interest to us.

¾ We ignore the structure of the index – for example the location of a company’s HQ and therefore its domicile are less relevant to us than where it generates sales and profits.

¾ Large swathes of the market are unattractive and of no interest to us.

¾ As index agnostic global investors we can go anywhere and only invest in the best ideas.

¾ As the portfolio is very different from the index, we expect portfolio returns to vary – sometimes substantially and often for prolonged periods.

¾ We aim to produce a portfolio of stocks with above average growth – this in turn underpins the ability of Monks to add value.

¾ We have a differentiated approach to growth, focusing on the type of growth that we expect a company to deliver. All holdings fall into one of four growth categories – as set out in the Portfolio by Growth Category table below.

¾ The use of these four growth categories ensures a diversity of growth drivers within a disciplined framework.

¾ Long-term holdings mean that company fundamentals are given time to drive returns.

¾ We prefer companies that are managed with a long-term mindset, rather than those that prioritise the management of market expectations.

¾ We believe our approach helps us focus on what is important during the inevitable periods of underperformance.

¾ As longer-term shareholders we are able to have greater influence on environmental, social and governance matters.

¾ Senior and experienced team drawing on the full resources of Baillie Gifford.

¾ Alignment of interests – the investment team responsible for Monks all own shares in the Company.

¾ Investments are held in three broad holding sizes – as set out in the Portfolio by Growth Category table below.

¾ This allows us to back our judgement in those stocks for which we have greater conviction, and to embrace the asymmetry of returns through ‘incubator’ positions in higher risk/return stocks.

¾ ‘Asymmetry of returns’: some of our smaller positions will struggle and their share prices will fall; those that are successful may rise many fold. The latter should outweigh the former.

¾ Investors should not be penalised by high management fees.

Portfolio by Growth Category as at 31 October 2018

You can read the full MNKS archive by clicking the EPIC code.