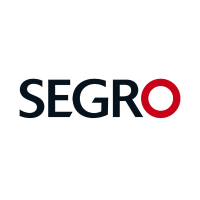 “The third quarter has seen another period of strong operational delivery from SEGRO. We have continued to secure high levels of new rental income both from our existing portfolio and from our active development programme, in which we have over 1 million sq m of new space under construction or in advanced discussions. During the period we also added further land and assets in our core urban markets, including in London and Paris to support further growth.

“SEGRO continues to benefit from the structural trends of urbanisation and technological revolution, and despite the uncertain macro-economic backdrop at this time, we head into the final part of the year with confidence. Looking ahead, the combination of new rental income from the development programme, compounded with the benefits of active asset management of our existing portfolio, should enable us to drive sustainable growth in both earnings and dividends.”

·    We have continued to capture reversionary potential from our portfolio, with new headline rents on review and renewal approximately 20 per cent higher than previous passing rent in the nine months to 30 September 2019 (30 June 2019: 12.8 per cent), reflecting a strong contribution from the Slough Trading Estate and in our Greater London portfolio.

·  We remain on course to invest around £600 million in our development pipeline (including land, infrastructure and construction) in 2019 as a whole.

·    During the third quarter we invested £78 million in urban warehouse asset acquisitions. Included in this were two off-market acquisitions in London, one in the East and the other in the South. We also made two further acquisitions in Lyon, helping us to build scale in this attractive, supply-constrained market.

·  We also invested £77 million in our land bank during the period, helping to create development opportunities in the very attractive urban markets of London and Paris, including the acquisition of eight acres of land in Tottenham, North London, on which we expect to construct 19,000 sq m of urban warehousing. We also acquired fourteen acres of land for an urban warehousing project close to Ingolstadt in Southern Germany.

·    Disposals during the quarter at £16 million were modest. They included land and assets in Gdansk, a market we have now exited, allowing us to focus on building scale in other Polish markets such as the key logistics hub of Wrocław, where a number of recent investments have been made. So far in 2019 we have disposed of £122 million of assets and land (9M 2018: £192 million).

·    Approximately 36 per cent of the interim dividend was paid as scrip, resulting in the issue of 3.3 million new shares during the quarter. Earnings per share for 2019 are expected to be based on an average of 1,081 million shares.

3 Based on values at 30 June 2019, adjusted for acquisitions, disposals and other capital expenditure during the third quarter.

You can read the full SGRO archive by clicking the EPIC code.