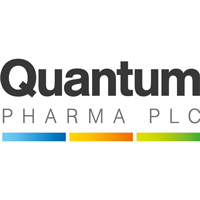 Quantum Pharma plc (LON:QP), the service-led niche pharmaceutical manufacturer, developer and supplier to the health and care sectors, has released a pre-close trading update this morning. Zeus Capital said: The Board has indicated that adjusted EBITDA for the financial year (to Jan 31st) is expected to be in-line with market expectations (we forecast £10.1m) and that net debt will be approximately £13.5m following the successful fund raising in November last year. Following management’s strategic review of the Group it has re-directed efforts within the key divisions to focus and strengthen operations. Trading at NuPharm has ceased as planned and the unlicensed-to-licensed (UL2L) portfolio has been prioritized enhancing the opportunity to be first-to-market. We are confident that the changes made have set the company on the right path for the longer term. Based on our unchanged forecasts Quantum is valued at 9.4x EV/EBITDA for FY2017 (year just completed) falling to 8.2x for the coming year.

As highlighted in the company’s update and earlier announcements, in addition to the cessation of trading at the loss-making NuPharm, key changes have been made to the company in the past few months including:

* UL2L pipeline– the Niche Pharmaceuticals division has been operationally streamlined such that all products in the current UL2L pipeline are under ‘active development’ with Lamda controlling the processes such as product formulation and bioavailability as well as preparation and submission of regulatory filings. The pipeline has been prioritised to enhance the commercial potential for the company by focusing on products where there is a greater chance of being first-to-market.

* Board and financing – following the successful equity fund raising of £15m (gross) in November 2016, the company has reduced its net debt to ensure the Group is well-financed and strengthened the Board with new appointments (Chris Rigg – CEO; Gerard Murray – CFO; Ian Johnson – Chairman; and experienced Non-Execs, Dr John Brown and Christopher Mills).

Management has indicated that the reported final results will contain some significant one-off, mostly non-cash, exceptional items the most important of which relates to NuPharm and associated write down of the Balance Sheet value of the investment.

As mentioned in October with the Interim results, the group experienced slower-than-expected sales of some of its generic and generic-plus products. Quantum has begun work to broaden its network of UK and international commercial relationships with a view to improving market penetration for selected generic products where it sees value in deals with partners that have greater sales and marketing expertise and presence in the generic pharma markets.

Comment: We are encouraged that management is focusing on the Group’s valuable core operations and delivering on its new strategic directions, particularly in areas where Group performance has been challenged due to issues within the divisions. The Group is clearly on a much more solid financial and operational footing for the coming years. The company’s full year results will be reported on Wednesday, May 3rd.

Chris Rigg, CEO of Quantum Pharma PLC, said: “The Group has made solid progress in simplifying and focusing on its core value opportunities. Prioritising the development of the UL2L products in our pipeline has given us a better opportunity to be first to market and drive value from the portfolio. We have taken decisive action to close a loss-making operation and have put the Group on a stronger financial footing going forward. I am pleased to report that we are executing in line with our plans.”

You can read the full QP archive by clicking the EPIC code.