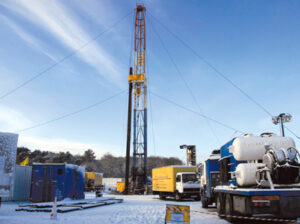 · From 19 August 2021 to 9 September 2021, Wressle has contributed approximately US$300,000 net to Union Jack from test production during this short period

· Assuming sustained deliverability, at current production rates Wressle is set to become the second ranked onshore oilfield in the UK next to Wytch Farm

·     Considerable upside remaining at Wressle from the Wingfield Flags and Penistone Flags reservoirs, both of which have already demonstrated their ability to flow oil to surface during testing of the original discovery well, and in addition, the Broughton North prospect

· Acquisition of a further 15% of Biscathorpe, bringing Union Jack’s interest to a material 45%

· Biscathorpe side-track planned to be drilled during 2022, from the existing B-2 well bore, targeting the Dinantian Carbonate discovery and Basal Westphalian sequences

· Negotiations are at an advanced stage with two North American financial entities to acquire a further combined 25% interest in the Claymore Piper Royalty, further details of which will be announced once finalised

“The period covered in this Half Yearly Report has seen important progress made at our three key project interests, namely, Wressle, West Newton and Biscathorpe   plus the addition of an attractive royalty revenue stream. Developments at our three material projects where we have meaningful economic interests have generated a steady stream of encouraging news flow, which we expect will be continued based on current activities.

“In the subsequent period to this Half Yearly Report, we have seen Wressle production rates well in excess of our projected 500 barrels of oil per day with a corresponding expectation of its potential to deliver material future revenues.

“Given these encouraging initial test results at Wressle, Union Jack management is of the opinion that, if Wressle is only half as good as we anticipate, then we will be hearing much more about this development for many years to come.

“The revenue potential from Wressle, the royalty stream and our wider appraisal testing and planned drilling activities, all augur well for the execution of our strategy in delivering material growth in the medium term and achieving our goal of building a sustainable, cash generating and profitable, UK onshore focused, mid-tier conventional hydrocarbon producer.

“The Board remains both confident and optimistic and the future of Union Jack remains bright.”