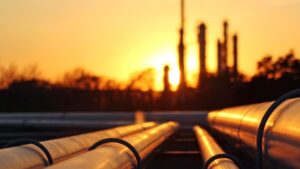 TomCo Energy plc (LON:TOM), the US operating oil development group focused on using innovative technology to unlock unconventional hydrocarbon resources, has announced the receipt of an independent report commissioned from Netherland, Sewell & Associates, Inc. estimating the oil reserves, associated marketable sand volumes, and future net revenue, as of 31 December 2021, in respect of a potential commercial scale project on the mining properties comprising the Tar Sands Holdings II LLC site located in the Uinta Basin, Utah, United States.  As previously announced, TomCo’s wholly owned subsidiary, Greenfield Energy LLC, owns a 10% Membership Interest in TSHII with an exclusive option, at its sole discretion, to acquire the remaining 90% of the Membership Interests for additional cash consideration up to 31 December 2022.

·    NSAI have estimated the proved, proved plus probable, and proved plus probable plus possible oil reserves, associated marketable sand volumes, and future net revenue, as at 31 December 2021 in respect of a 100 per cent. interest in a potential commercial scale project on the mining properties comprising the TSHII site

·    Total estimated undiscounted future net revenues (as described further below) range from US$942 million based on 1P reserves to approximately US$2.5 billion based on 3P reserves in respect of a gross 100% interest in TSHII

Commenting, John Potter, CEO of TomCo, said: “We are delighted with the findings of NSAI’s Report.  The Report serves to confirm our view that the TSHII site contains substantial economic resources, both in terms of oil and marketable sand, that we are focussed on seeking to exploit.

“Greenfield continues to progress its previously announced plans to pursue both the drilling of certain near-term oil production wells and, thereafter, the potential acquisition of the balancing 90% of the Membership Interests in TSHII and construction of its first commercial scale plant on the site, all of which remain subject to securing the requisite funding. We look forward to providing further updates in due course.”