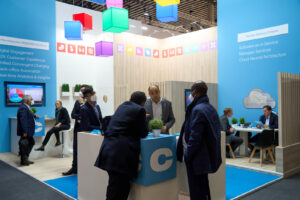 Cerillion plc (LON:CER) Chief Executive Officer Louis Hall and Chief Financial Officer Andrew Dickson caught up with Liberum for an exclusive interview to discuss how the market backdrop and pipeline evolved in H1, cost inflation and managing the cost base, back-order and forward visibility and the outlook for the company for FY22.

Q1: Louis, how has the market backdrop evolved in H1 and what are the key dynamics?

So, that is driving digital transformation so looking at the products that enable our telco customers to sell to their end customers and get those products to market so we are seeing that as a very positive driver in our world.

Q2: How has Cerillion’s pipeline evolved and what is the outlook for new orders with both prospective and existing customers?

A2: We’ve seen very strong growth in our pipeline in the six month to 31st March 2022 so our new customer business pipeline grew by 31% to £172 million at the end of March ’22. I think that growth is largely driven by the factors I’ve just been speaking about and we would expect a significant proportion of that bulge in the pipeline, if not all of it, in H2 and successive quarters. So, very strong on the new customer side.

On the existing customer side, also seeing growth in pipeline and I think that’s being helped by the trend we have in our business towards signing larger deals with larger customers. That has helped significantly in terms of boosting the sales that we’re winning with existing customers.

Q3: Andrew, are you seeing cost inflation? What’s your ability to pass through this inflation to customers and are you pulling any levers to manage the cost base?

A3: In terms of our cost base, the biggest cost that we face is our people and we’ve definitely been seeing inflationary pressures in terms of payroll in the first half of the year.

If you look at our geographic footprint, we’ve got offices in the UK and India and back in September last year, we opened a new office in Bulgaria which offers a very good source of high quality software engineers.

Whilst we recruited people in all offices during the first half of the year, we really focussed our recruitment efforts in India and the new office in Bulgaria. By doing so, we managed to reduce the average cost per head in the first half of this year versus the first half of last year, despite significant inflationary pressures, particularly in India.

I think looking forward to the second half of the year, we expect these inflationary pressures to continue as well as potentially higher travel costs as we get back to business as usual following the COVID restrictions. We also expect a slight increase due to higher employers NI costs as well which we’ll do the best we can to mitigate.

Another lever we’ve been pulling as well as trying to recruit people in India and Bulgaria, we’ve also been passing on these cost increases to customers  through pricing so that’s another initiative that we’ve done in order to mitigate the impact of inflation that we’ve been facing.

Q4: Louis, how has the back-order book evolved and how much forward visibility does this provide?

A4: Our back-order was very strong at the end of the financial year and has only come off very slightly, despite having a lower total new orders number for the first half of ’22 than we had for the first half of ’21. We obviously expect the new order number to catch up by the end of the year so we’re not concerned about this being low at the half-year.

We have a situation where last year we had a very large new customer deal get closed in the first half of ’21, this year we think the larger customer deals will close in the second half so we think that’ll work itself out.

The backlog is only very slightly down compared with the end of the financial ’21 and at £39 million of backlog in terms of the target we have for the second half to meet consensus forecasts. We think that gives us very strong visibility looking into the rest of ’22 and certainly a very good start for ’23, coupled of course with the increase in recurring revenue that we now have.

Q5: What is the outlook for Cerillion for FY22?

A5: I think the outlook is very strong. As I said, we have very strong backlog going into the second half so I think in terms of meeting consensus forecasts, if we were concerned about that we would be saying something. We’re not so one would assume that we’re confident but we do have a lot of visibility because of that strong backlog.

I think we’re also very confident about the sales pipeline which has, as I said earlier, grown 31% half on half and we would expect some of that bulge – the new customer pipeline – to fall out into H2. Plus, we also expect strong sales to existing customers to continue as well so that’s obviously very important in terms of looking towards the rest of ’23 and ’24.

So, all in all, I think the outlook is really positive.