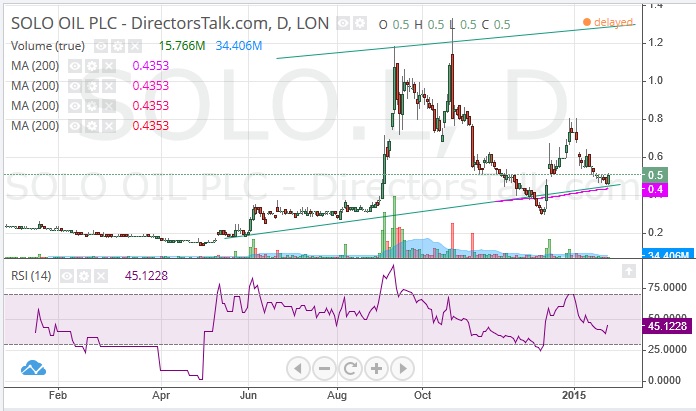 Clearly it has been the case that for any company with the word oil in its name past three months has not exactly been the happiest of times. The effective halving of the underlying commodity has caused many in the market to reassess their exposure to black gold with understandable consequences.

In terms of the current technical position at Solo Oil we can see that the shares are in the aftermath of a Bull Trap Double Top for September/October and then a drift back towards the 200 day moving average currently standing at 0.46p.

However, the overall sweep here does appear to be positive nature given the latest rebound off the 200 day line in the way that January support is coming much higher than the December floor well below 0.4p on this basis one would cautiously target a rebound towards the initial January resistance zone 0.8p, particularly while the 200 day moving average is held.

Only those who wish to see further evidence of positive momentum would wait on a momentum buy trigger such as an end of day close back above the 20 day moving average at 0.58p before taking the plunge on the upside. Overall, the call is that with late 2013 support coming in towards former August 2013 resistance, Solo Oil does have a positive charting construction and that we would assume a return to the main 1.2p resistance zone as early as the end of Q1 2015 – Crude Oil permitting.

You can read the full SOLO archive by clicking the EPIC code.