Tanzania………..Domestic Natural Gas Demand Set to Soar as Solo Oil announces completion of a Sale and Purchase Agreement with AMINEX for the acquisition of a further 3.825% interest in the Kiliwani North Development Licence to take their stake to 10% for a consideration of US$2.16 million.

Tanzania signed the International Energy Charter on the 20th May 2015 in The Hague, The Netherlands. The Energy Charter is an international organization that promotes the rule of law and regulatory stability for investment, trade, transit and efficiency in the energy sector across the world. The signing of the charter by the government of Tanzania is an important step opening up further transparency in terms of reporting standards.

The European Union has set aside more than EUR €3 billion (2014 to 2020) to promote sustainable energy in Sub- Saharan Africa. The importance of these efforts has been reinforced by the 2014 G7 and G20 meetings in Brussels, Belgium and Brisbane, Australia, respectively, which highlighted the need to provide strategic assistance for sustainable socio-economic growth and financial rebalancing in developing and emerging countries.

In this context, the Energy Charter Secretariat, in collaboration with the European Commission, DG Development and Cooperation, has developed a capacity building programme with African countries to introduce them to the universal market-based principles enshrined in the International Energy Charter and the Energy Charter Treaty, and to assess their energy sectors against these universal principles.

Back in July 2015, The International Energy Charter Secretariat produced its first report on Tanzania’s energy sector, which has helped shed light on the country’s future domestic energy demand. A key aspect of the work of the charter is to assist countries like Tanzania in developing an energy supply mix that is based around a sustainable low carbon economy and to critically maximise use of the country’s natural resource assets which in the case of Tanzania, includes harnessing their abundance of natural gas to help generate electricity from the new era of energy efficient gas fired power stations.

“Today’s news by SOLO that it has agreed terms with AMINEX to increase its stake in Kiliwani to 10% is timely, given that a much clearer picture in now building up in Tanzania about the demands the country will have for domestic natural gas where the Kiliwani KN-1 well is ideally positioned to service this demand” 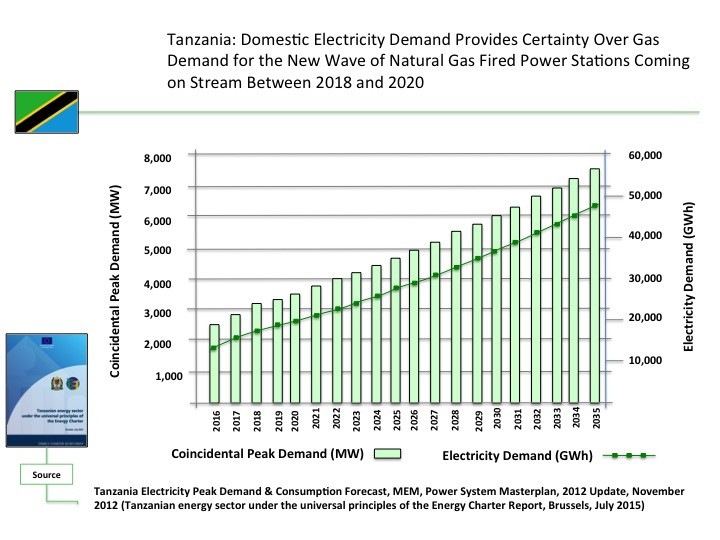 To satisfy Tanzania’s domestic electricity demand, the government of Tanzania has set about a program with its parastatal electricity generating and distribution company TANESCO, to engage in the construction of a new range of natural gas fired power stations which is set to add another 2,516 megawatt’s of electrical generating capacity by 2030. Diagram two shows the program of electricity plants set to come on stream by 2030.

“For those analysts concerned about the future prospects of Tanzania’s domestic natural gas demand, think again, it’s is set to boom.” 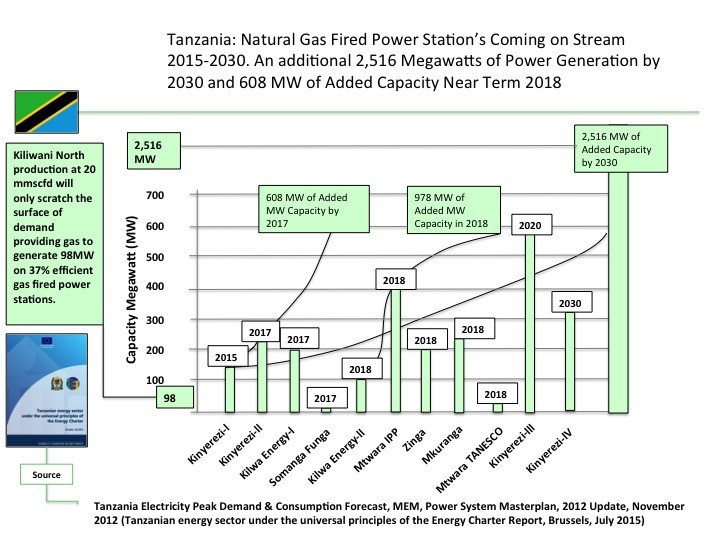 These gas-fired power stations will provide significant future demand for natural gas from Tanzania’s own natural gas discoveries. The recently constructed Mnazi Bay to Dar es Salaam gas pipeline now makes it much easier for onshore gas fields with commercially viable recoverable natural gas, to be monetized. AMINEX and SOLO’s Kiliwani North well will produce 7,120 MMscf of gas each year. Diagram three shows the predicted natural gas demand for the Dar es Salaam area up to 2039. For those analysts concerned about the future prospects of Tanzania’s domestic natural gas demand, think again, its is set to boom.

Production from Kiliwani north will provide just a fraction of Tanzania’s near term natural gas demand, as 608 megawatts of gas fired power stations come on stream by 2017 and with 978 megawatts of power generation added by 2018.

According to the Feasibility Study for a Natural Gas Pipeline from Dar es Salaam to Tanga (Tanzania) and Mombasa (Kenya) April 2011, Tanzania’s MMscf demand will rise to circa 50,000 by 2018. Diagram three illustrates this growth. This growth in demand is set add urgency to the task of bringing the AMINEX and Solo Ruvuma gas filed into production, which also benefits from close proximity to the Mnazi Bay to Dar es Salaam gas pipeline, where it can be plugged in easily. 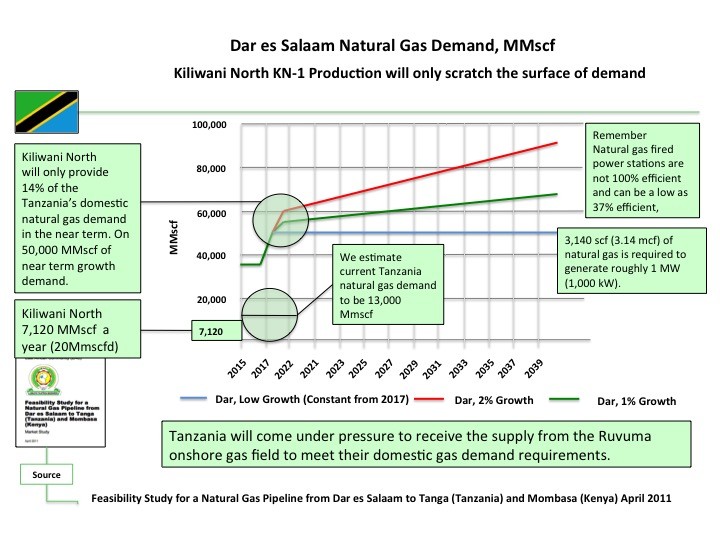 Kiliwani North is forecast to produce 20 million scf/d. We estimate that Tanzania’s current portfolio of natural gas fired power stations, because of they are based on old technology, are only able to only convert 37% of gas input into electricity. On these levels Kiliwani North’s KN-1 well could be used to support generation of 98 MW of electricity. For those not familiar with the mathematics, 3140 scf (3.14 mcf) is required to generate roughly 1 MW (1,000 kW). Each 1MW will therefore require (3140 * 24) scf of gas each day, ie 75,360 scf. Of course that is when a natural gas fired plant is operating at 100% efficiency.

“Domestic Natural gas demand in Tanzania does not only come from the power generating sector, cement plants, other industrial user and gas bottling companies all take deliveries of natural gas and this market is growing as Tanzania’s economy is growing.”

Summary: Tanzania is at a very interesting turning point. According to reports, the country is on track to secure its first international credit rating later this year. Tanzania is aiming for a benchmark rating of at least BB, the same rating that both Kenya and Ghana have achieved. With a credit rating in place, the country can press ahead with the issue of a Sovereign Debt Bond to raise approximately USD 700 million. The government of Tanzania has previously indicated that the money raised from the issue of this bond will be used to advance the country’s natural gas sector.

Of critical importance in Tanzania’s gas sector value chain that spans natural gas, recover, processing, transportation, power generation, distribution and finally consumer purchasing, is TANESCO. Tanzania’s parastatal electricity company would benefit from a strengthening of its financial position. TANESCO is a critical player in Tanzania’s gas industry value chain and should the government of Tanzania be successful in issuing its bond, the a key focal point for investment must surely be TANESCO.

“For these AIM listed companies and indeed other listed companies operating in Tanzania, the securing of an international credit rating by the government of Tanzania will be a material event that should result in the issue of an RNS, by these companies.”

For the London AIM listed companies operating in Tanzania’s gas sector such as AMINEX Plc, Solo Oil Plc and Wentworth Resources Ltd (LON:WRL), the successful issue of Tanzania’s sovereign debt bond will be a significant value catalyst. The securing of an international credit rating by the government of Tanzania will be a material event that should result in the issue of an RNS, by these companies.

Further, this event should help attract further institutional investors into these stocks, given the country risk will have been properly credit rated. In the case of AMINEX and SOLO, the situation in Tanzania will become even more supportive of the development of the massive Ruvuma gas field, which is owned 75% by AMINEX and 25% by SOLO. In the case of Ruvuma, if you base the TCF valuation on the same benchmark as the Ophir-Pavilion deal where Pavilion paid $353 million per TCF for its 20% stake in Tanzania’s offshore blocks 1,3,4, then Ruvuma would be valued on an un-risked basis (1.17tcf) at $413 million minimum but on 2.3 tcf (AMINEX resource estimate for Ruvuma) of $811 million. Solo Oil Plc own 25% of the Ruvuma PSA. Accordingly the value attributable to Solo could be anywhere between $100 million to $200 million, and remember the Ntorya well in the Ruvuma PSA has pipeline infrastructure nearby and is an advanced project that can get into production very quickly. Ruvuma would not only be a field that should be prioritized for development, but one that should attract significant investment interest should Tanzania secure its first credit rating.

In the short term, todays deal by Solo will see it go on to generate up to $200,000 per month in free cashflow from Kiliwani’s production.

You can read the full AEX SOLO WRL archive by clicking the EPIC code.