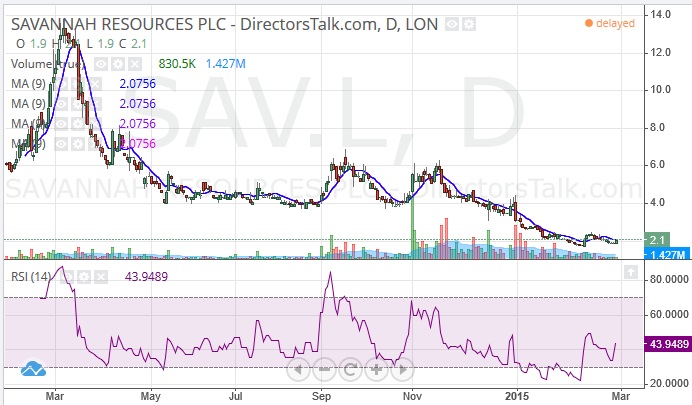 It is likely that there will be few who would deny past year in terms of the price action Savannah Resources (LON:SAV) has not been difficult, especially from the perspective of the longs.

What can be seen on the daily chart is the way that we have been treated to a quite a persistent decline since an early March 2014 peak for the shares through 13p. While there was an attempted basing towards 4p over the autumn, this only led to a double top above 6p completed in November, followed by a new leg to the downside.

However, it would appear that this latest bearish phase is over, a point which is underlined by the higher support for the shares above 2p in the second part of February. All of this offers a technical trade using the early February floor at 1.75p as an end of day close stop loss, with any weakness towards the zone regarded as a buying opportunity.

The initial target would then be early January resistance at 3p over the course of March. However, it would be understandable some cautious traders might wish to wait on the clearance of the 50 day moving average currently at 2.58p as a momentum buy signal before pressing the buy button. The best case scenario at this stage is a clearance of the 15 moving average weekly back to December resistance at 4p on a 2 to 3 months timeframe.